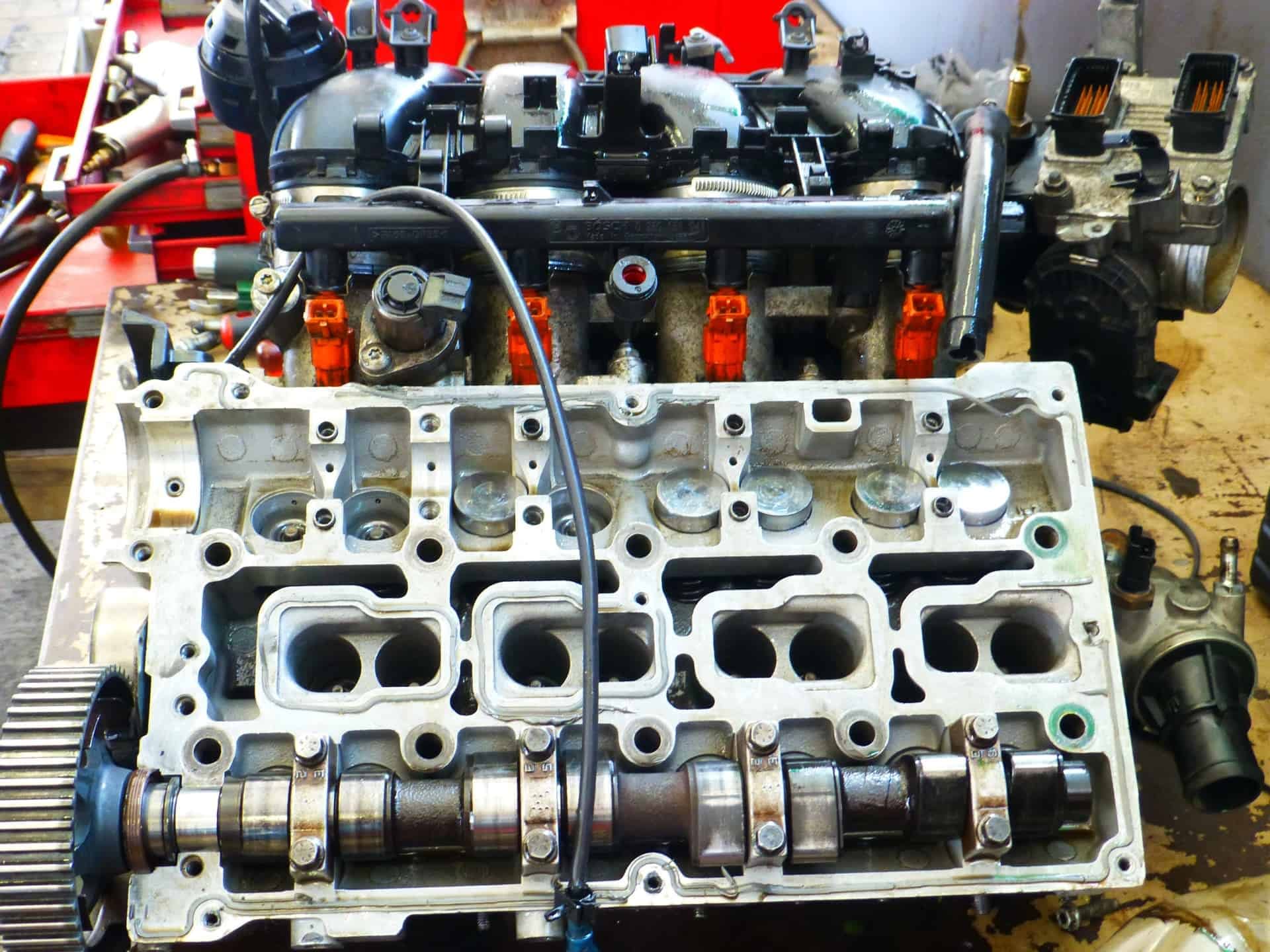 Host: Okay…Robert, at some point if people find that their vehicle is running rough, they start it up in the morning just going down the road, it’s not running normally, what does that mean? Is there any general indications of what could be causing a rough-running vehicle?

Robert: There’s quite a few things that can cause that. One of them is tune-up. If your spark plug or electronic ignition components are starting to fail in some way. There’s coil, plug, wires… if any of these components aren’t allowing spark to get to the cylinder where it’s supposed to, to burn the fuel, then that’s a problem.

It’s not gonna propel you forward like it’s supposed to, and that engine is gonna run rough.

Host: So a rough-running engine, that is frequently associated with some sort of electrical or electronic problem sparking the engine, is that right?

Robert: Yes, either an emission issue or a tune-up issue, something like that can definitely cause that, but then you have other fuel issues too, so I hate to say it’s mainly combined into that, because there’s quite a few different things that it can be.

Host: How does it relate to emissions?

Robert: Well emissions…in your engine, it has to build up vacuum, and that vacuum has to be regulated. If it’s not regulated, then the computer doesn’t understand what’s happening and it says, “Hey, this isn’t working correctly,” and so the engine will run rough. The computer makes judgments that are incorrect, and it’ll make it run incorrectly.

Host: So it’s gonna give it its best shot. The computer is gonna try and keep your vehicle on track, running smoothly, running as efficiently. Is that it?

Host: Efficiently as possible to keep emissions down because of the regulations we have these days.

Robert: Right. Because of those regulations, the computer is told, or its mandate is that whatever is comin’ out of the exhaust needs to be as low-emissions, as in harmful products coming out of that exhaust pipe, it has to be as minimal as possible.

Robert: Clean as possible. Even if it kills other components, it doesn’t care.

Robert: Like the catalytic converter, valves, oh yeah, it can cause a lot of other problems. But yeah, that’s its mandate, is to put out as few contaminants as possible.

Host: What would you suggest? I’m drivin’ down the road, the car seems a little bit rough, and this has happened to me, and then maybe the weather changes, something else changes, a week goes by, I say, “Well, it seems to be okay now.” Does that mean I probably had a real problem? An underlying problem?

Robert: It means you have a problem that’s happening every once in a while. So at some point it’s gonna get worse. Get it checked out.

Host: Just bring it in.

Robert: Bring it in, have us check it out, see what’s going on, and we’re gonna find out what that problem is. And hopefully if you nip it in the bud and get it sooner rather than later, it’ll cost less.

Host: Sure. Is there anything to do on an ongoing basis in terms of the emission system in the vehicle? Is there any maintenance associated with that, or is that just other parts and systems that effect the emissions?

Robert: There’s not really maintenance other than keeping up on your tune-up. Tune-up is roughly done…in this day and age, you’re gonna do it every 100,000 miles, 105,000 miles.

Host: So that involves spark plugs, and you said the throttle body.

Host: Okay. What else?

Robert: Spark plug wires, and also… ignition coils, correct. Now, you don’t replace ignition coils all the time, mainly when they go bad, but the thing that kills the coils is spark plug wires that are weak. When they’re weak, it means that coil has to generate more power to push electricity through them.

Host: And that strains the coil?

Robert: And that strains the coil.

Host: Wow. So really in a perfect world, all of these components need to work close to 100%. They need to be maintained.

Robert: They need to be maintained, and…

Host: Because otherwise it’s going to affect something either upstream or downstream, and you’re gonna have more problems, more cost. So it sounds like the bottom line is just have your car inspected on a pretty regular basis looking for things, because that’s the smart way to save money in the long run. Is that correct?

Robert: Correct. And the thing is, back in the ’50s and ’60s, you know, when you did a tune-up, it didn’t cost that much. Spark plugs were maybe a couple bucks. These days, since they’re requiring so much out of these engines, they’re having to run hotter, and the spark plugs of the olden times aren’t able to handle the heat and temperatures and withstand what’s going on inside that cylinder. They can’t hack it.

So that’s why they have these spark plugs that are fancier. They’re platinum, double-platinum, iridium, double-iridium. It’s because the heat and temperatures inside of the engine…it needs to be able to withstand that.

Robert: So intense. So, I’ve heard people say, “Ah, you know what, I’m not gonna replace these spark plugs,” so they’ll go and replace them with cheap, inexpensive ones because that price looks really nice. It’s a lot cheaper. The problem is that if you put a spark plug that’s only good for 30,000 miles in a car that…it was supposed to go in like a 1970s Buick, but you put it in a 2015 Honda Civic…

Robert: BMW. It’ll fit, it’ll fit. The problem is, is that in that BMW, or in a Toyota Corolla, a Honda CRV, a Ford Fusion, these aren’t that high fancy of vehicles, but they require a fancy double-iridium spark plug.

Host: How expensive? What are we talking?

Host: Every couple of years.

Robert: Yeah, every couple of years. Or else you would have other problems. So now they’re making the duration…they’re lasting longer. They make ’em so they can last 100,000 miles. And they’re supposed to last 100,000 miles. You will get that mileage out of them.

Host: But in the bigger scheme of things, if you keep the vehicle for say 200,000 miles, a lot of people do that these days, you’re talking about replacing them once in the middle of that, and maybe you don’t replace it at the 200,000 mile, you get some other vehicle, some new vehicle.

Robert: Right, if so you imagine you’re getting a heck of a lot more time out of them. And the price after you add up what it costs…it’s probably comparable.

Host: Right, because you’re getting so much more mileage out of them.

Host: It can’t handle the strain of the temperatures.

Robert: It can’t handle it, no.

Host: Well, what I’m picking up here, what I’m learning is that, throughout our discussions is that, it’s better to nip these things in the bud.

Host: Always, to keep your costs down, to keep your vehicle running properly, to keep from getting stranded on the side of the road. There’s really no way around this, but people try to do that, but…

Host: But at least sometimes fail. Now of course I’m pretty sure I’ve done that too. Why do I have to pay for this, you know, extra…this extra fee and this part is the same. But because of the advancement of technology and the pressure of, let’s say keeping emissions as low as possible, and keeping the fuel usage as high as possible in the sense of more miles per gallon, we have to have these super-efficient, very tightly-knit engine systems.

It’s not sloppy like it was decades ago, so you really need the right parts and somebody that knows what they’re doing to make that whole system keep running for you for a good long time.

Comprehensive Auto Insurance and Mechanical Damage Host: Robert, I think what you were saying is a…

How to Find a Auto Repair Shop

Happy Customers Tell You a Good Plaece! Host: Robert, in your experience, when consumers are…

Has your car developed a strange leak, smell, noise, or sensation? Call us, we'll check it…